Injuries and my fears of aging

Yes, this is another blog post following a very prolonged gap. Yes, I changed the name of the blog to something more reflective of the general range of topics about which I've been writing. Moving on.

So in the past few weeks, I've had a chunk of my lip ripped nearly off and fixed with stitches (now it's fixed and all that's left as evidence is an irregular spot on the inside of my lip and a slightly loose tooth which my dentist says may die at literally any random time), broken a finger, and apparently had an impact on my knee which caused a little pocket of fluid to swell up along w/the regular bruising. Yes I'm a martial artist, but only one of those three was because of martial arts. The other two were from basketball. Though my Sensei will continue to say all of them are from the latter. Two out of three injuries not being from my lifestyle of electing to get punched in the face is enough irony for me.

But anyway, I've been thinking about my body and aging as I deal with this succession of injuries which each wind up having effects on my ability to engage in regular physical activities in ways disproportionate to their external appearance. Seriously, the bump on my knee has a circumference about the size of a nickle, but the pain after going to class at the dojo last night and playing basketball tonight was unbelievable. And that's saying something coming from me. I think I have a pretty high pain tolerance, and folks who know me know that I am totally that guy who never admits to being hurt or needing medical assistance (much to the chagrin of a few of my close friends -- sorry!).

Ok, back to my body and aging. I hate being physically unable to train the way I normally do when at the dojo. It makes me angry, upset, and when it lasts longer than one single day, it makes me kind of depressed (in the colloquial sense, not the clinical sense). 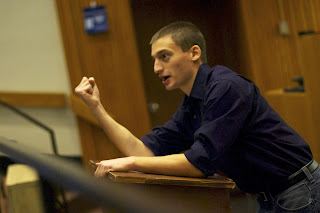 After my four years at Geneseo, most people know me as an intellectually-oriented individual, someone who spends most of his time working with his mind. And that's true, in a sense. I do identify that way -- I am, after all, on a path to hopefully have a career in academia.

But I'm also a martial artist. That should make it obvious that I also identify strongly with my physicality as well as my intellectual inclinations. While training and exercise eclipses a bit during the academic year because of just how time-consuming my academic life is, I still work hard to keep myself active and training. 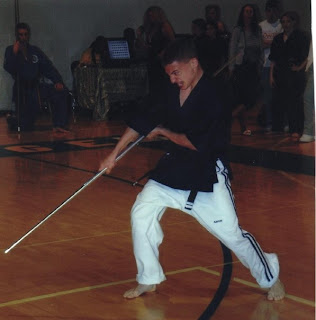 And you know what? I'm proud of that. I'm proud of the fact that I can keep my everyday resting heart rate hovering down around 45. I'm proud of the fact that, while I am an absolute failure at pretty much every sport I've ever tried, I still pass as an athlete of sorts. And I'm proud (evidently proud enough to tout my own horn in a blog post! hahaha) because I know I work hard (not to disavow luck -- I was blessed with a fast metabolism and other genetic factors that help out, as well as others that don't). Being proud of those kinds of things is part of my sense of identity. Part of me sense of self is my self-knowledge of my body's capabilities and a personality trait of refusing to accept apparent limitations (except for when my fears of heights or deep water factor in!). I relish in my martial arts training for many reasons -- martial arts has influenced literally every dynamic of my persona (that's a future blog bost). But one of those reasons is the pure physicality of it.

So that brings me back to the topic of injuries. I get a ton of bumps and bruises and there's always a part of my body that's sore -- to the point where I honestly answer "I don't know" when people ask me where some bruise or bump came from or why my legs or shoulders or whatever hurt. But rarely do these things impede my capacity to train at the level of intensity at which I like to train. When something happens that does impede me, however, I become very upset. And like I said, I become kind of depressed. I know it's not a unique feeling. A ton of people, within and outside the world of martial arts, have felt that kind of depression when you realize your body won't do something it usually has no problem doing. I am lucky beyond belief that I have never had such an injury last permanently and still enjoy the privilege of being able-bodied. But again, I know tons of people have had that temporary state where they can't quite perform the way they usual do.

I don't know about you, but for me, this depression at having my body limited by injury gets me thinking about the prospect of aging. Honestly, I am afraid to age. Not because I'm afraid of living on my own. Not because I'm afraid of trying to find a job. Not because I'm afraid of adult responsibilities. But because I'm afraid of what's going to happen to my body as I age, especially because at some point the effects of aging are outside of our control! (Don't get me started on my control issues!) The day will come when I can't run as fast, fight for as long, or get hit as hard as I can now. I already feel I'm getting older as I wake up each morning knowing whether it will be a "good" day or a "bad" day for my wrists (the difference being measured most accurately by my discomfort in the high plank position). I can tell that I'll have arthritis in my hands at some point (I've broken, sprained, or severely jammed 9 out of 10 fingers).

I know this has been a very self-centered post. All about me and my feelings. But I'm curious. How do any of (the two or three of) you who read this feel about your body aging, and more importantly, about the effects of that aging process being at some point outside of your control?